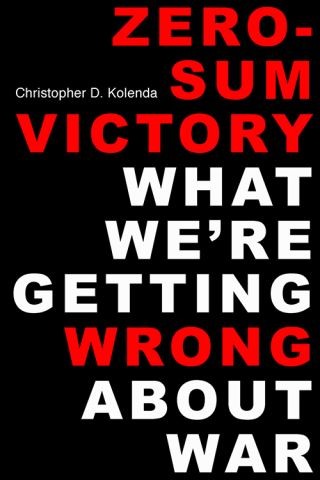 What We're Getting Wrong About War

Why have the major post-9/11 US military interventions turned into quagmires? Despite huge power imbalances in the United States' favor, significant capacity-building efforts, and repeated tactical victories by what many observers call the world's best military, the wars in Afghanistan and Iraq turned intractable. The US government's fixation on zero-sum, decisive victory in these conflicts is a key reason why military operations to overthrow two developing-world regimes failed to successfully achieve favorable and durable outcomes.

In Zero-Sum Victory, retired US Army colonel Christopher D. Kolenda identifies three interrelated problems that have emerged from the government's insistence on zero-sum victory. First, the US government has no organized way to measure successful outcomes other than a decisive military victory, and thus, selects strategies that overestimate the possibility of such an outcome. Second, the United States is slow to recognize and modify or abandon losing strategies; in both cases, US officials believe their strategies are working, even as the situation deteriorates. Third, once the United States decides to withdraw, bargaining asymmetries and disconnects in strategy undermine the prospects for a successful transition or negotiated outcome.

Relying on historic examples and personal experience, Kolenda draws thought-provoking and actionable conclusions about the utility of American military power in the contemporary world—insights that serve as a starting point for future scholarship as well as for important national security reforms.

Christopher D. Kolenda: Christopher D. Kolenda is a West Point graduate, internationally renowned combat leader, and retired Army colonel. He holds a PhD in War Studies from King's College, London, and is the editor of Leadership: The Warrior's Art. He is the first American to have fought the Taliban as a commander in combat and to engage them in peace talks.