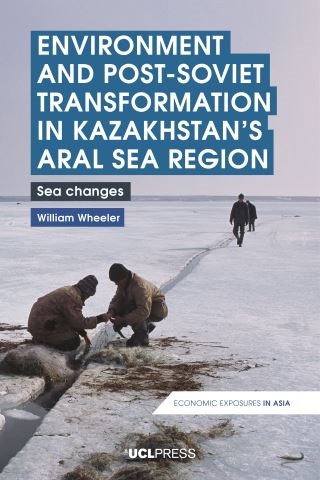 The Aral Sea is well known for its devastating regression over the second half of the twentieth century, and for its recent partial restoration. Environment and Post-Soviet Transformation in Kazakhstan’s Aral Sea Region is the first book to explore what these monumental changes have meant to those living on the sea’s shores.

Following the fluctuating fortunes of the pre-Soviet, Soviet and post-Soviet fisheries, the book shows how the vast environmental changes the region has undergone cannot be disentangled from the transformations of Soviet socialism and postsocialism. This ethnographic perspective prompts a critical rethinking of the category of environmental disaster through which the region is predominantly known. Tracing how the sea’s retreat and partial return have been apprehended by diverse local actors in the former port of Aral’sk and surrounding fishing villages, as well as by scientists, bureaucrats and international development workers, William Wheeler draws out the multiple meanings environmental change acquires within different contexts. This study of how people make their lives amidst overlapping ecological and political-economic upheavals is rich in ethnographic detail that is both rooted in Soviet legacies and alive to the new transnational connections that are reshaping the region.

William Wheeler: William Wheeler is Leverhulme Early Career Fellow in Social Anthropology, University of Manchester. He carried out fieldwork in the Aral Sea region of Kazakhstan in 2012-14, completing his PhD at Goldsmiths, University of London, in 2016. His current research project is closer to home, looking at experiences of enforced destitution and encounters with a hostile, disbelieving bureaucracy among those seeking asylum in UK.