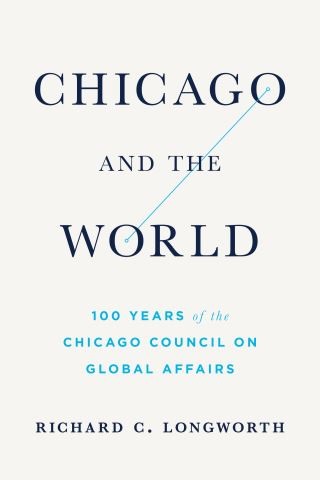 Chicago and the World

100 Years on the Chicago Council of Global Affairs

Chicago has belonged to the world for a century, but its midcontinental geography once demanded a leap of the intellect and imagination to grasp this reality. During that century, the

Chicago Council on Global Affairs guided and defined the way Chicago thinks about its place in the world. Founded in 1922 as the Chicago Council on Foreign Relations, as a forum to engage Chicagoans in conversations about world affairs, both its name and mission have changed. Today it is an educational vehicle that brings the world to Chicago, and a think tank that works to influence that world. At its centenary, it is the biggest and most influential world affairs council west of New York and Washington, with a local impact and global reach.

Chicago and the World is a dual history of the first one hundred years of the Chicago Council on Global Affairs and of the foreign policy battles and debates that crossed its stage. The richness of these debates lay in their immediacy. All were reports from the moment, analyses of current crises, and were delivered by men and women who had no idea how the story would end. Some were comically wrong, others eerily prescient, and some so wise that we still profit from their lessons today.

The history of the past century reflects the history of the Council from its birth as a worldly outpost in a provincial hotbed of isolationism to its status today as a major institution in one of the world’s leading global cities. It is a tumultuous history, full of ups and downs, driven by vivid characters, and enlivened by constant debate over where the institution and its city belong in the world.

The Council of today has a bias very similar to that of the Council of 1922— that openness is the only rational response to global complexity. It rejected the isolationism of 1922 and it rejects nationalism now. In 1922, it recognized that the outside world affected Chicago every day. In 2022, it insists that Chicago affects that world. Chicago then was a receptor for outside ideas. Chicago today is a generator of ideas and events. Both the world and Chicago have changed, but the Council’s goals—openness, clarity, involvement—remain the same.

History of the Council:

The Chicago Council on Global Affairs was founded in 1922 amid the aftermath of World War I, the Senate’s rejection of the League of Nations, and the influenza pandemic of 1918. Today, at its centenary, it is the biggest world affairs council west of New York and Washington, DC. It is both a forum for debate on global issues and a think tank working to influence those issues.

Chicago and the World offers a dual history of the Council and the great foreign policy issues of the past century. Founded in America’s heartland, the Council now guides the international thinking of one of the world’s great global cities. Its speakers include the men and women who shaped the century: Georges Clemenceau, Jawaharlal Nehru, Jan Masaryk, George Marshall, Eleanor Roosevelt, Walter Lippmann, Margaret Thatcher, Willy Brandt, Helmut Kohl, Henry Kissinger, Ronald Reagan, Mikhail Gorbachev, Joseph Biden, and Barack Obama, among others. There have been Nobel Prize winners and Nazis, one-worlders and America-Firsters.

The Council emerged in a Chicago dominated by isolationism. It led the great debate over American participation in World War II and, after that war, over our nation’s new dominant role in the world. As a forum, it struggled with major issues: Vietnam, the Cold War, 9/11. As a think tank, it helps lead our nation’s thinking on global cities, global food security, the global economy, and foreign policy.

The Council’s one hundredth anniversary follows another pandemic, the Covid-19 crisis, at a time when a new wave of nationalism and nativism distorts America’s place in the world. The Council sees itself as nonpartisan but not neutral in this debate. It is committed to the ideal of an informed citizenry at home and openness and involvement abroad.

Richard C. Longworth: Richard C. Longworth is a Distinguished Fellow at the Chicago Council on Global Affairs and the author of three books on globalization. Earlier he was a foreign correspondent for the Chicago Tribune and United Press International. He has won two Overseas Press Club of America awards and was twice a Pulitzer Prize finalist.