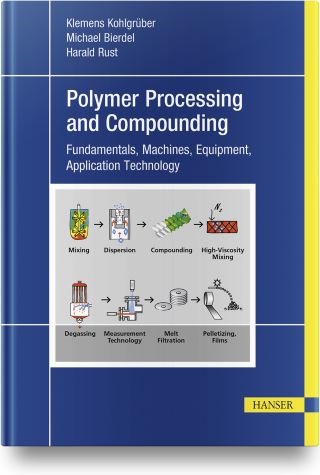 In this handbook, the central middle step, preparation and compounding, is discussed.

The process engineering fundamentals and the specific equipment and machines used are described. The specialist authors impart their knowledge from the fields of research, polymer production, and equipment/machine production with applications in plastics technology.

Klemens Kohlgrüber: Dr. Klemens Kohlgrüber undertook a metalworking apprenticeship and completed further training as a mechanical engineer in Cologne. He studied mechanical engineering in Wuppertal, followed by a diploma and doctorate at RWTH Aachen University. From 1986 to 2015, he worked for Bayer AG, among other things as Head of High Viscosity, Mixing, and Reactor Technology. At the same time, he gave lectures for several years at the University of Dortmund for chemists in the master’s program on polymer processing/preparation. For several years he was head of the High Viscosity Technology working group of the Forschungsgesellschaft Verfahrenstechnik (German Research Association for Process Engineering) and he is a former member of the Association of German Engineers (VDI) advisory board for plastics processing technology. Dr. Kohlgrüber also leads annual VDI seminars on extruders.|||Dr.-Ing. Michael Bierdel studied process engineering at the University of Stuttgart and received his doctorate in 2001. Since 2001 he has been working in research and development at Bayer Technology Services GmbH (Bayer AG), now Covestro Deutschland AG (Covestro AG), in the High Viscosity Technology group, which he has led since 2012.|||

Dipl.-Ing. Harald Rust studied mechanical engineering in Bochum and successfully completed his studies in 1975. After various positions as a development engineer, he founded his own engineering office in 1985. From 1987 the further development of the company Entex to a machine factory took place. Today Entex employs about 140 people and is the technology leader with the planetary roller extruder.