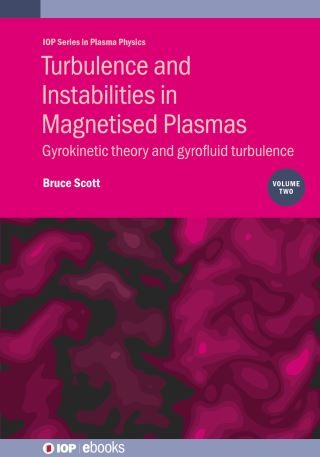 Ever since the first observations of turbulent fluctuations in laboratory plasma experiments in the years around 1980, turbulence in magnetised plasmas has been a subject of vigorous interest in the field of plasma physics and magnetic confinement.

The second of a two-volume set, this book begins with a review of the concepts behind magnetised plasma turbulence as covered in Volume One. After covering the effects of temperature dynamics, especially heat flux inertia, the rest of the first half reviews classical field theory in the necessary language, then builds the gyrokinetic and gyrofluid theory in a systematic and self-consistent manner, with special emphasis on energetic consistency. Gyrofluid turbulence in various flavours in a magnetised plasma is then covered, with control cases and energetic analysis. Familiar magnetohydrodynamic instabilities are reproduced in gyrofluid language, and then turbulence in a flow layer, current channel, pressure layer, or all three, is covered. A reprise of the theory in terms of a gauge transform with functional Lie-Poisson bracket structure closes the volume.

Bruce Scott is a research plasma physicist having graduated with a Doctorate from the University of Maryland in 1985, and with the German Habilitation from the Heinrich-Heine-Universität Düsseldorf in 2001. He is a Fellow of the American Physical Society with membership since 1979. He has several tens of first author papers in peer-reviewed journals in the field of theoretical plasma physics.