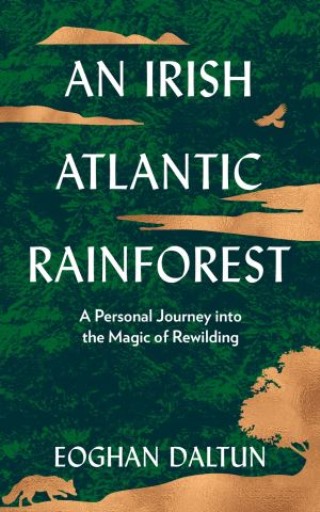 A Personal Journey into the Magic of Rewilding

On the Beara peninsula in West Cork, a temperate rainforest flourishes. It is the life work of Eoghan Daltun, who had a vision to rewild a 73-acre farm he bought, moving there from Dublin with his family in 2009.

An Irish Atlantic Rainforest charts that remarkable journey. Part memoir, part environmental treatise, as a wild forest bursts into life before our eyes, we're invited to consider the burning issues of our time: climate breakdown, ecological collapse, and why our very survival as a species requires that we urgently and radically transform our relationship with nature.

This is a story as much about doing nothing as taking action - allowing natural ecosystems to return and thrive without interference, and in doing so heal an ailing planet.

Powerfully descriptive, lovingly told, An Irish Atlantic Rainforest presents an enduring picture of the regenerative force of nature, and how one Irishman let it happen.

Eoghan Daltun is a sculpture conservator, a farmer and, above all, a rewilder.
Reared in Dublin, he has travelled widely, as well as living abroad in London, Paris and Prague. He spent seven years studying sculpture in Carrara, Tuscany.
In 2009, he sold the cottage in Kilmainham he had rebuilt mostly single-handed from a ruin - dating back to at least the 1750s - using the original stone. The proceeds went to buy a long-abandoned 73-acre farm overlooking the Atlantic near Eyeries on the Beara Peninsula, West Cork. Much of the land was covered in wild native forest which, although very beautiful, was ecologically wrecked by severe overgrazing and invasion by a host of alien plant species.
Over the years since, Eoghan has brought life in all its explosive vibrancy back to the land, with new temperate rainforest spontaneously forming where previously there was only barren grass. Restoring such an incredibly rich ecosystem has taken him on a fantastic journey of discovery, lifting a curtain to reveal a whole universe of wonders beyond. Rewilding most of the land, and High Nature Value farming the rest, there has been plenty of time to reflect deeply on the ecological crisis unfolding at terrifying speed all around us, and its solutions.
He lives on the farm with his two sons Liam and Seánie, their collie dog Charlie, and five Dexter cows: Maggie, Gertrude, Amber, Nelly and Minnie.